Top Posters In This Topic

Below are the 3 options for you re the disrupted Clark-Bangkok-Clark flights: 1). Rebooking – up to 1 month without any charges. For round trip flight, same number of days must be followed. 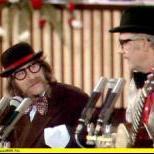